Seven Books, Seven Authors, share the wealth and enter the $200 Rafflecopter above to win a $200 Amazon gift card. And be sure to check out the books being launched this month by the John 3:16 Marketing Network.


The Redemption of Caralynne Hayman

How far would YOU go to avenge a daughter’s cruel death?

Cara is considered rebellious and inappropriate to befriend. Dayne is the apple of Elder Simmons’ eye—until he takes a stand against their teachings. Can his prayers and love reach Cara and show her the way to redemption? Will Cara realize God’s love and forgiveness before she goes too far?

The Redemption of Caralynne Hayman is a novel of hope shining through the darkness with strong elements of suspense and romance. This novel was a semifinalist in the Genesis contest and is receiving raving reviews!

Brother Half Angel is the leader of a secret new church military order, dedicated to helping Christians under attack around the world. Relentless suspense is the hallmark of this gripping thriller. But it is also a book that raises serious questions – how far can Christians go to defend themselves? When should they turn the other cheek? What happens when a Christian kills in self-defense? And should those who live by the sword really expect to die by the sword?

Green Leaf’s cousins are all older than he and don’t like to play fair. He longs for a friend his own age he can play with, explore and fish with. When he meets a Luxembourger boy, Henri, Green Leaf is sure they could become friends, but Henri’s words are strange to Green Leaf. How can they play and explore together?

Green Leaf’s mother says, “Friends learn to speak one another’s words.” But will Green Leaf learn to say his friend’s words well enough to save Henri when he falls into danger?


Spiralling Out of Control (The Spiralling Trilogy)

Temptation, depression, seduction, betrayal ... Not what Stephanie was expecting at fifteen years of age. Uprooted from her happy, all-girl high school life with a dream filled future and thrown into an unfriendly co-ed school, Stephanie spirals into depression.
When charismatic high school senior, Jason notices her, Stephanie jumps in feet first and willingly puts all her faith and trust in him, a boy she barely knows.
Every choice she makes and turn she takes leads her towards a dangerous path.
Her best friend is never far away and ready to catch her … but will she push Tabbie too far away when she needs her most?


Hobbits, You, and the Spiritual World of Middle-Earth

Are hobbits, elves, and dragons real?  These creatures are common in fantasy but have you ever met one? Maybe not literally, but J.R.R. Tolkien's famous characters bring to life real character qualities we all can learn from, whether good or bad. What can the bravery of a hobbit, the faith of an elf, or the greed of a dragon teach teens about themselves? How can their stories lead us to the real Kingdom where God is working out way more than a fantasy for his people? Dig into these familiar characters and relevant Bible passages to find out. Understand how to live your own epic story!


The Donkey and the King (A Story of Redemption)

The Donkey and the King is a story of love with Christian symbolism and allegory. Travel to the Bible lands and meet Baruch, a stubborn donkey, and other lovable animals: Lowly, the pig; Much-Afraid, a small, lame dog; Worldly Crow, who isn't as bright as he think he is; and a sheep, Little, sent on a special mission by the King. The ending of the story will delight young readers as they discover “good” exists in the world if they look and listen for it.

GUILTY UNTIL PROVEN INNOCENT:  When a drug-smuggling ring rocks a small coastal town, the DEA sends Agent Owen Matthews to shut it down. A single father with a deaf son, Owen senses that the town's number one suspect—the high school's new principal—doesn't fit the profile. Miriam Hunter hoped to shrug off the stigma of her hearing impairment when she returned to Stepping Stones, Maine. But her recurring nightmares dredge up old memories that could prove her innocence—and uncover the truth behind a decades-old murder. Yet Owen's help may not be enough when someone decides to keep Miriam silenced—permanently. 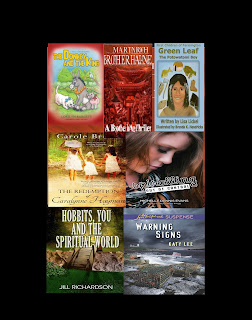 Posted by Lorilyn Roberts at 11:16 PM