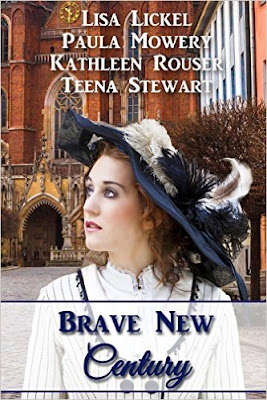 For a limited time, a holiday special for historical romance lovers!

From the Publisher:
Four young women each brave challenges at the dawn of the 20th century. Will they overcome their hardships and find love?

Three Rings for Alice by Lisa Lickel
Alice Smith is a thoroughly modern young woman at the brink of the twentieth century. She may be an orphan, but she enjoys the companionship of close friends who all look toward the future. When they begin pairing off, Alice feels lonely. In her job as the Milwaukee Mayor’s secretary, she keeps long hours at City Hall, filing, copying correspondence, and answering the new telephone system, the first without a switchboard.

When an intriguing-sounding man makes an accidental call to the mayor’s office, they strike up a companionship. Alice tells herself she doesn’t miss him when his random calls stop and she begins a no-nonsense courtship with a friend. Until he calls again.

Forgiven by Paula Mowery
Henry isn’t interested in working in the family business. He has his own aspirations. And his mother is determined to make sure he weds a woman he doesn’t love.

Jessie wants to build a life for herself and her sister that is more than the life her father dealt her when he abandoned them.

When Henry and Jessie meet, it seems to be the classic love at first sight until a shocking revelation tears them apart.

The Pocket Watch by Kathleen Rouser
Isabel Jones, an orphan, receives a ruby ring left by the mother she never knew and wants more than ever to find her roots. When a young physician, Daniel Harper, rescues her from an oncoming automobile and she finds his pocket watch in a puddle, her circumstances take a turn.

She begins to consider what life outside the orphanage could be like. Daniel’s heart has been broken before and the attractive young lady who finds his treasured timepiece wouldn’t be deemed suitable by his social climbing parents.

When Isabel and Daniel work side by side, caring for the orphanage children during an influenza epidemic, she becomes gravely ill. Compelled to redeem the time by helping her find the past, Daniel finds a buried truth, connected to the ruby ring, which creates an unbridgeable chasm between them. Where will they find hope in a hopeless situation?

Flames of Hope by Teena Stewart
Young San Francisco police officer Gideon Light is smitten the moment he sees Lily McMinn rolling down the awnings on her father’s mercantile. Lovely, petite, and spunky, Lily had to grow up quickly after her mother passed away. She not only oversees the welfare of two younger siblings, she also helps run her father’s business.

Gideon and Lily are immediately attracted to each other and soon become good friends. It doesn’t take long before Lily realizes her feelings for Gideon have changed to something far deeper. He secretly harbors dreams of advancing in the force to earn a substantial enough income to make Lily his wife.

Before either has a chance to pursue each other, however, an earthquake of unthinkable magnitude shatters their world. With a raging fire fast in its wake, tragedy and triumph await as Gideon, Lily, and her family flee for their lives with little more than the clothes on their backs.

Set during the time of the great 1906 San Francisco earthquake and fire, this tale of great loss, incredible human courage, and sweet romance will inspire and warm your heart.

Brief interviews with each author: 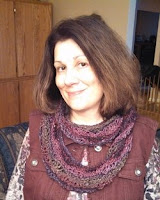 What about Detroit’s history influenced your story, The Pocket Watch?
I knew someone who’d grown up in a Catholic orphanage in Detroit many years ago. I wondered if there were similar Protestant ministries in the city at an earlier time and discovered the Protestant Orphan Asylum of Detroit. I had been researching the Crittenton Mission, a home for unwed mothers, for another story, but wondered about what it would be like for a child left in and growing up at an orphanage.

How did you use your setting, Kathy? Did you make your story fit facts, or did you use facts you uncovered to create your story and guide your characters?
I mostly tried to make my story fit the facts, doing my best to find as much as I could about the streets, the homes, and the stores, some which have names that are familiar even today. Also, I remember my mom talking about riding on the streetcars, a trolley type of transportation, and found that it existed many years before her time. I hoped to create as realistic a backdrop as possible.

There had been some flu outbreaks in the city in other years. Though there wasn’t an epidemic reported at that exact time, I felt it was a plausible reason for quarantine conditions at the orphanage.

How did you come up with the idea of making the pocket watch a key part of your story?
There’s something I’ve always found intriguing and elegant about the use of a pocket watch. The watch, a gift from the Daniel’s father, is something which a doctor would be hard pressed to live without. The lost object is like a treasure to an orphan like Isabel and she wants to return it to the owner. The timepiece, like time itself, becomes integral to bridging Daniel’s past to his future. This also fits with the focus of a new year and indeed, the new century coming.

Kathy, what did you enjoy most when writing your tale?
That’s a tough one. I enjoyed digging up books containing old photos of Detroit, learning a little more of the history of the city which I grew up so near and where I spent much time. It was nice to see its past vitality and know there’s hope for its future as well.

I also enjoyed watching my characters grow and adding humor with the cantankerous poodle, Taffy. It was hard to say “good-bye” to Isabel and Daniel! 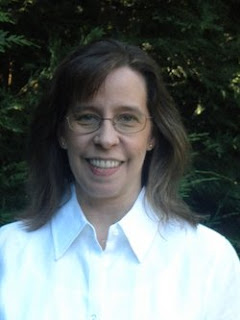 How did you go about finding historical facts about Knoxville’s history for your story, Forgiven?
My mom and I took a little trip to an archive section of the library that is in downtown Knoxville. We had a fun time exploring there. I found directories for exactly what business was at what spot on the city streets. Many of the building numbers and establishment names used in Forgiven were really those listed for that time in the 1900s.

Of course, another part of the story, the shoot-out, came from some ancestry probing done by my father. The hero and heroine are based upon my paternal grandparents.

Where did your story meld with the setting, Paula, to make Knoxville the unique influence on your characters?
Knoxville is the place the hero and heroine "find" each other. My grandparents actually lived in a house near downtown Knoxville.

Your story Forgiven is based on a true story. Who were the people in the real life story and how did you learn about the tale?
My father had done some ancestry digging and found the newspaper account of a shoot-out between his father and uncles and some business colleagues. My paternal grandfather, Henry, survived the gun battle and went on to marry my grandmother, Jessie Lee. I have never heard the story of how they got together. That's where I took some fiction writer's license.

What takeaway would you like readers to get from Forgiven?
Forgiveness is something we must learn to extend just as God has so willingly extended it to us.

What gave you the idea for making the telephone a part of your story in Three Rings for Alice?
I was researching inventions around the turn of the twentieth century for a blog I used to write for—Favorite Pastimes—and learned more about the telephone and switchboards and how technology was changing. It also happened to be about the time of the 100th anniversary for the Milwaukee City Hall, and when I learned that this building was one of the first to feature direct dialing, I was able to incorporate that aspect into the story.

Why did you choose Milwaukee for the location?
It’s only thirty miles from where I live—I grew up south of there, and now live north of there. I love the county history museum, which is also nearby the city hall. 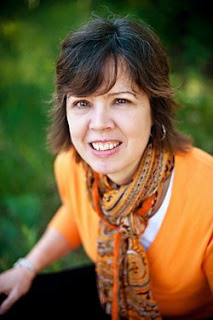 Teena, what influenced your choice to set your story, Flames of Hope, in San Francisco?
We lived in the Bay area of California for a while and I learned about the great earthquake and fire. When I was invited to write a story for the book the stipulation was for it to be a romance set at the turn of the century and in a city, so it was a natural choice for me.

When you devised your story, was it more around the facts, or did you have your story in mind before you researched the events of the era, and what choices did you employ to guide your characters? All I knew was that I wanted a romance to take place in San Francisco during the earthquake. I had no story line in mind and no idea of characters. I brainstormed who those characters might be and why they would know each other. I came up with the idea of a shop girl. Who would she know? Locals. Who could be a local she is drawn to and see on a regular basis--a young policeman. I felt that if there was already a spark between them, then putting them in danger would be a catalyst for drawing them closer together and would make for an exciting story.

To purchase BRAVE NEW CENTURY on Amazon,
click here
Posted by Lorilyn Roberts at 4:18 AM