"Spiralling out of Control" Excerpt and Review by Lorilyn Roberts 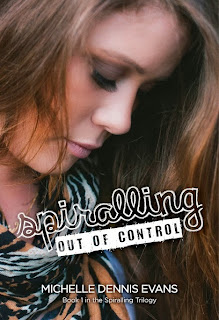 Temptation, depression, seduction, betrayal ... Not what Stephanie was expecting at fifteen years of age. Uprooted from her happy, all-girl high school life with a dream filled future and thrown into an unfriendly co-ed school, Stephanie spirals into depression.

When charismatic high school senior, Jason notices her, Stephanie jumps in feet first and willingly puts all her faith and trust in him, a boy she barely knows.
Every choice she makes and turn she takes leads her towards a dangerous path.
Her best friend is never far away and ready to catch her … but will she push Tabbie too far away when she needs her most?

BOOK REVIEW OF "SPIRALLING OUT OF CONTROL" BY LORILYN ROBERTS

"Spiralling Out of Control" is well written, realistic, and scary. As the mother of a 15-year-old daughter, I would not want my daughter to read this book, however. While rated by the author for 15 and up, I would go with 17 and up. The content is for mature teens only. Sex, booze, drugs, rape, overdose, pimps, and illegal activity are dominant themes, with hints of Christian spirituality. As a Christian, I also struggled with the fact that there wasn't the redemption that I hoped for at the end -- but I suppose, when teens go so far down this path of destruction, they may not be able to be saved, though I know that you are never out of the reach of Jesus Christ.

If I had a teen I felt like I was on the brink of losing, this would be a book I would recommend, Christian or non-Christian. I personally don't like dark books, but if I were to recommend one, this would be it. I hope in the sequel that the author will work in the redemption for which the spiritual part of me longed. I would strongly recommend that a parent read this book first before recommending to his or her son or daughter. I believe the content can serve as a good starting point for a troubled teen that needs counseling and direction spiritually, emotionally, and mentally. This book also reminded me of the need to be involved in my daughters' lives, praying for them and being there for them. "Spiralling Out of Control" may serve as a wake-up call -- our kids need parents who love and care -- all the time, day and night, when it's convenient and when it's not! We need to be available to meet their needs, even when they think they don't need us.

SHORT EXCERPT FROM "SPIRALLING OUT OF CONTROL"
BY MICHELLE DENNIS EVANS

“Stephanie,” April called.
“Go away,” she mumbled from under the pillow.
“Steph!” April flung the bedroom door open. “Steph, I’m practising a new routine, come watch.”
Stephanie pulled a tissue from the box to wipe her face. She grabbed a handful more and dragged her feet along the short hallway and halfway down the stairs. Slumping over her knees, she hugged an arm through the vertical posts to watch her sister flipping and cartwheeling around the empty lounge room. Stephanie glanced at her mother standing in the kitchen doorway and clenched her teeth. April. Always the favourite!
“Gymnastics display finished.” April took a bow. “Your turn.”
“Where’s Dad?”
“Oh, he just had to pop into the office for a bit to sort things out there.” Her mother shook her head.
Would they really see more of him now that his office was so close?
April stood at the base of the stairs. “Come on Steph. Dance.”
Stephanie refused, denying herself the chance to dance, and ran back upstairs. She swallowed. Her stomach churned.
“Don’t you want to dance?” her mother called after her.
Of course I want to dance, but you can’t seem to find the money.
Stephanie closed her bedroom door and leaned against it. She cried until she’d saturated all the tissues in her hand. Flinging her wardrobe open, she dug out any dancing gear she could find and threw it all into the bin. Done. Over. Gone. Season of life finished.
Her mother’s words still stung. ‘We might have to check the cost.’ Gah! It seemed the star gymnast’s fees came first.
She needed to hide. From the world. From her parents. From her sister. Climbing into bed she pulled the covers over her head. She drifted between awake and asleep until she startled awake. Light shone through her doorway. Musk, the scent of her mother, tickled her nose. Her body stiffened as she closed her eyes—the last thing she wanted was a conversation with her mother.
“Lord, watch over her as she sleeps,” Diane whispered.
Stephanie held her breath until her mother padded out of the room and clicked the door closed. She cried until her tears stopped flowing, then she took a breath and tears rolled again until she slept.

Please pop over to the John 3:16 page and enter the Rafflecopter for your chance to win a $200 Amazon voucher http://bit.ly/Christian_Books

Michelle Dennis Evans writes picture books, chapter books, young adult contemporary novels and enjoys dabbling in free verse poetry. Her debut novel Spiralling Out of Control and poetry collection Life Inspired both reached #1 in subcategories on Amazon in their first week of release. Michelle is passionate about seeing people grow and move forward in their journey. She lives on the Gold Coast with her husband and four super active, super fun and super time consuming children. Find Michelle and all of her social media links at MichelleDennisEvans.com

Posted by Lorilyn Roberts at 2:09 AM

Email ThisBlogThis!Share to TwitterShare to FacebookShare to Pinterest
Labels: book review by Lorilyn Roberts, Michelle Dennis Evans, Spiralling Out of Control, YA