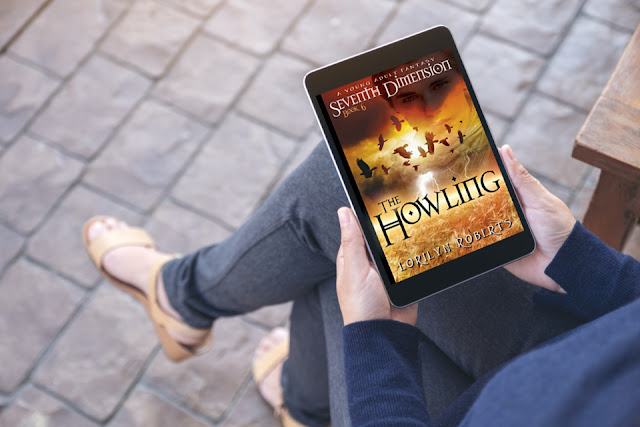 The Howling: A Young Adult Christian Fantasy is the sixth book in the Seventh Dimension Series by Lorilyn Roberts, a story told in atmospheric prose that follows the spiritual journey of a compelling character — Daniel Sperling. The Kingdom of God draws near and the spiritual landscape changes, with untold challenges and a prevalent culture of deception and evil. It is shortly before the arrival of the Messiah when Daniel receives a great mission. But he is shaken by a powerful revelation concerning the fate of his father. Follow him as he navigates great challenges, faces the horrors of the Day of the Lord and remains steadfast in his love for Shale and Shira.

When the story begins, readers are treated to a wonderful racing experience, with Daniel competing against the ruthless Tariq in a chariot race that ends in a way no one expected. The religious symbolism of the race is beautifully captured and the reader immediately understands that time doesn’t exist in the spiritual realm — it is an illusion. I enjoyed the powerful use of religious symbolism and allusion, and the relationship between Daniel Sperling and Shale Snyder, a love so strong it continues to inspire the hero of the story and acts as an anchor for him. The author uses visions and supernatural experiences to lift the minds of readers and transport them from their immediate surroundings, just as the case of the protagonist. The writing is gorgeous and crisp and filled with wonderful descriptions, from action-packed scenes to emotionally rich encounters, to awe-inspiring moments of spiritual ecstasy. The Howling is a book that will inspire readers and make them look beyond their physical experience of pain to find delight in the hope of a spiritual world that could be theirs. Highly imaginative and skillfully written, the message can’t be mistaken and the reader feels compelled to be one of the Followers of the Way.
☦☦☦☦

To sample or order from Amazon, Kobo, Apple Books or Barnes & Noble, visit my website:  bit.ly/LRHowlingWord
If you are interested in getting the full six-volume Seventh Dimension Series, visit Amazon by clicking on this link. Discounted price is $9.99.

Posted by Lorilyn Roberts at 2:12 AM No comments: Links to this post

There Shall Be Two Men In One Bed