Posted by Lorilyn Roberts at 11:32 PM No comments:

Review of Seventh Dimension Mini Box Series, Books One, Two, and Three, by Carol A. Brown 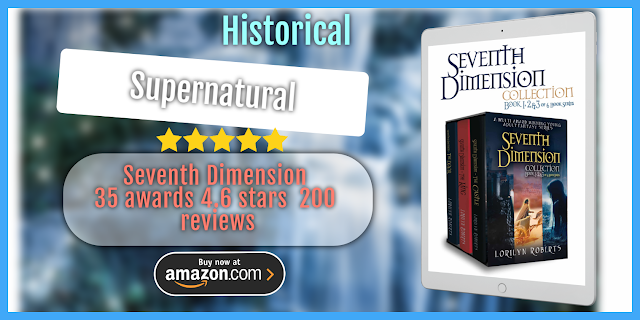 Gripping. This set is filled with action and drama. It is historical fiction, sci-fi fantasy, and time travel all in one! I really enjoyed it and appreciated the Christian worldview. This whole series has nearly nonstop action throughout! The Door starts out in Shale’s modern-day Florida, but quickly shifts to the 7th Dimension. The King and The Castle take place in and around the city of Jerusalem relative to the crucifixion of Jesus. Shale quickly becomes a believer in Yeshua as Messiah, but Daniel struggles with all the issues present-day secular Jews struggle with. He sees the events leading up to the crucifixion and resurrection with his own eyes and puts them alongside what he knows from his Hebrew studies, his family and friends from modern times, his own reading of the Bible; it creates a unique dilemma of faith. He learns forgiveness firsthand and is almost immediately tested. Woven through the story is the thread of a repeated dream or vision of his father who disappeared. Finding him becomes Daniel’s quest.

Characters & Setting: Characters were well developed. In addition to Shale and Daniel, you meet Romans, Arabs, lepers, religious leaders, a compassionate doctor, and ordinary everyday people trying to survive and make a living. You will meet strange spiritual beings, talking animals and see it all through the eyes of Shale, a run-away teen, feeling abandoned and isolated, and Daniel, a modern, secular Jewish pre-med student who along with Shale, was transported into the times of Christ—a time before modern technology. It portrays the struggles secular Jews have with believing that Jesus could ever be the long-awaited Messiah.

Themes teens relate to:
• unfairness
• injustice
• not listening and/or not taking people seriously
• the struggle to believe when your culture and training have taught you not to

Writing Craft: Vivid imagery in her writing creates mental images that stay with the reader. She did an excellent job incorporating the teachings of Jesus into the resolution of Shale’s problems. Well plotted!

Recommendations: This is a set that I could recommend to teens interested in fantasy, who are dealing with similar issues as those Shale encountered, or faith issues such as Daniel faced. I would recommend it to anyone struggling with intellectual issues with Jesus or persons who struggle against the pull of their culture. I would also recommend it to adults/parents of troubled teens to help give them an understanding from a teen perspective.
*~*~*

Reviews help authors a lot. If you are interested in reading and reviewing, let me know by leaving a comment. You can check out the Seventh Dimension Mini Box Series on Amazon by clicking here.

Posted by Lorilyn Roberts at 3:52 AM No comments:

Why do you suppose in our soul as we age we don't feel older? Our bodies do, but our minds can go back to when we were young and we can remember things like it was yesterday. It makes you wonder if it's because our souls are eternal and God made us to live forever with Him pic.twitter.com/NMTIWr8whu
— Lorilyn Roberts (@LorilynRoberts) October 18, 2019

Posted by Lorilyn Roberts at 4:02 AM No comments: