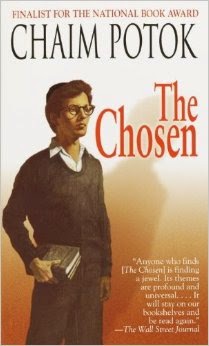 The Chosen was written in first person and the many themes were handled realistically and authentically. I felt like I was reading a memoir from the protagonist, Reuven. Chaim Potok writes in a matter-of-fact style with a smoothness that is comforting and reassuring. I could relate to and understand the protagonist’s problems as well as that of his friend, Danny Saunders.

The story was set during World War II in New York. Potok wove the war into the story to magnify the issues of faith, life, and death. Some of his references were very specific which intensified the meaning and drama of The Chosen, as if the name of the book had a double meaning; i.e., D-Day, President Roosevelt’s death, the subsequent discovery of the concentration camps, the horror of learning that six million Jews had been slaughtered, and the determination of Reuven’s father to give the Jews a homeland in Palestine.
The conflict of Danny with his father was the most intriguing theme for me: Would it be possible to never speak to my father except when debating the Talmud? It seems improbable, but Potok did succeed in making me believe it was true. The lengthy passages about how the Hasidim sect began, the meaning of Apikorism, the finite differences in Judaism between Danny and Reuven, the intensity of the meaning of their Jewishness, and the biographical sketch of Reb Saunders’ history and family members (his genius brother and what happened to him) helped to create the realism that he and Danny never spoke to each other except when debating the interpretation of the Talmud.

Pokok took a complex theme (family relationships and faith) and wove the story into one that is universal, particularly for the Jewish people, who have suffered for thousands of years as God’s “chosen” people. I believe this type of book is important for the younger generation where so much that is written is fluff and superficial. I believe most adults tend to underrate what young people are capable of understanding and embracing. The Chosen has raised the stakes in challenging all of us to respect the difficult choices that some young people must make when dealing with family, faith, values, and destiny.

To purchase from Amazon, click here:
Posted by Lorilyn Roberts at 12:30 AM