A Critical Analysis of Seventh Dimension – the Door, Based on a Critical Reader’s Favorite Review 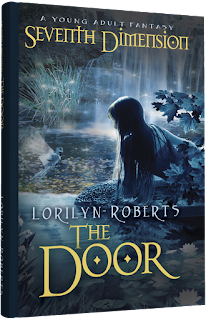 The Reviewer is Stefan Vucak (3 stars). Here is her unedited review:

“With her mother divorced, foster father away and after a series of troubled experiences at school, Shale Snyder encounters a strange white dog who leads her through a portal into another dimension. In a strange kaleidoscopic world, she meets a talking donkey and a rabbit. Descending into a village, Shale is told that her real father is a powerful Roman official and she is transported 2000 years into the past. Always busy, her father doesn’t have much time for her, working to suppress an uprising in Jerusalem. Her foster mother is jealous of her, banishing a boy Shale was friends with, but ends up getting her comeuppance. Shale joins with the king, discovers God and returns to her own reality.

I liked the start to "Seventh Dimension". Lorilyn Roberts portrays Shale as a real person with real problems, and I was waiting to see how her life would develop. When she slips into another dimension and encounters talking animals with which she can converse, the story loses much of its appeal as the discourse with them often doesn’t have much relevance to anything. Shale is searching for something and I thought it was family and fatherly love. When she observes the ‘king’ being tempted by the devil with its allegorical reference to Christ’s life, the book turns into a twisted bible story and everything becomes predictable. Lorilyn Roberts has allowed her imagination to soar with the "Seventh Dimension", invoking haunting images of magic and childish delight. Her writing is evocative and the dialogue crisp, making it a pleasure to read. As a religious fairytale with magic thrown in, the book will have a big audience, especially young readers.”

Here are my comments from Ms. Vucak’s review which I hope readers will find evocative. I welcome the opportunity to expound on some of the issues this reviewer raises. Be aware, if you have not read Seventh Dimension – The Door, you might find this a spoiler.

Thank you for reviewing my book Seventh Dimension - The Door.

First, there are some important factual errors that are important in understanding the theme of Seventh Dimension – The Door.

Shale's foster father was not away. In fact, there was no foster father at all. Shale was “abandoned” by her birth father when she was young. He left Shale’s mother penniless. Shale and her mother were forced to live with strangers for years and the young girl Shale lived with in the beginning was a bully and hated her.

Two years later, after the "accident," Shale's mother remarried. The man she married became her stepfather, though he had not adopted her.

This is important, absolutely crucial to the story, because the theme of the book is: You are a daughter of the king.

I bring this up also because Shale's family was not "fixable" until something significant happened -- mainly until Shale changed. This happened when she went back in time into the Seventh Dimension -- where she was forced to confront her own demons, her dysfunctional family, the father who left her, the boy who molested her, her wicked stepmother, her brother who needed healing, as well as meeting a young man from her future and a powerful king.

You missed another very important point. Here is a quote from your review: “When she slips into another dimension and encounters talking animals with which she can converse, the story loses much of its appeal as the discourse with them often doesn’t have much relevance to anything.”

The animals are important. First, they represent parts of Shale’s personality – fearful, insecure, bossy, and yet pristine with a kind heart. Can you identify which animals these were? Worldly Crow was the betrayer – how you could think the animals have no relevance is strange to me.

The animals move the plot forward: The dog in the beginning, spelled backwards is symbolic of God reaching down and drawing her into His world. When we have a spiritual encounter, we enter into another world. I called it the seventh dimension. The animals introduced her to the King – her eternal heavenly father. The animals accepted her unconditionally and had faith in her. Shale gained strength from them and grew in maturity as she cared for them. She learned to put their needs ahead of her own. In the beginning Shale was really very selfish and self-absorbed, as are all young adults who have been abused. It’s a matter of self-preservation.

I could say more about this. There is a lot of symbolism – the bird in the garden was the first to tell her she was a daughter of the king – like a prophetic foreshadowing. In the end, the king set the bird free, allegorical of Shale being set free.

Shale learned obedience through suffering, through imprisonment in her private quarters. You will remember toward the end, she locked herself in the room willingly. Obedience is part of the Christian life.

You made this statement in your review: “Shale is searching for something and I thought it was family and fatherly love. When she observes the ‘king’ being tempted by the devil with its allegorical reference to Christ’s life, the book turns into a twisted bible story and everything becomes predictable.”

Sadly, many kids will never receive love from their family. They will receive judgment and conditional love. Conditional love comes in many forms.

To be honest, I would be hard pressed to believe you could have known what would happen from the temptation in the wilderness until the end of the book. If you did know, you are a genius and you should be able to make some big bucks with that kind of intelligence. My utmost respect for you if that is true.

The biggest issue for Shale was she had to learn forgiveness to be able to receive the king’s unconditional love. When she returned home, she brought the rock into the house and took it up to her room, even though her mother didn’t understand. Shale at that point had enough self-worth to overcome her mother’s lack of understanding and begin anew. She was no longer bound by other people’s opinion of her. The word Ebenezer means “new beginnings.”

I get the impression, though I may be wrong, that you are not a Christian and do not understand the power of this story in Biblical terms. The message here for kids is one of hope – that you can rise above your circumstances and your difficult family situation and succeed in life, but you don’t have to do it all on your own. In fact, you can’t humanly-speaking do it all on your own. The king of kings will help you. Shale entered into a search for answers and she found a Savior. She realized who her father was—a king who would never leave her or forsake her.

I hope my extensive comments here will help you to see this is more than just a story – it’s my life told in fable and allegory. I was Shale Snyder, and this is my testimony with lots of creative storytelling. And I will leave it to the reader to wonder which is true and which is fiction.

If I receive more than six comments, one person will be selected to receive a free print copy of my book.

Posted by Lorilyn Roberts at 1:27 AM