Another Awesome Review by J. Steve Miller of Seventh Dimension - The Castle, Book 3

5.0 out of 5 starsCared About the Characters
ByJ. Steve Milleron December 22, 2015
Format: Kindle Edition

Children grow up hearing and reading Bible stories, but when they become teens, the stories probably lose some of their luster. Sure, there’s always a new insight or a fresh way to apply a familiar passage. But you no longer read the parable of the prodigal son and wonder how the story will end. As a result, we lose a bit of the wonder of it all, failing to grasp what it would have been like to hear it in the first century, as a bystander enraptured by the Teacher’s story.
Enter the power of the historical novel that dares to allow their characters to mingle with Jesus’ followers and see Him in person. Somehow, it gives us an angle that breathes new life into old, familiar stories. At least, that’s what The Castle did for me.The author certainly made it easy for me to care about her characters and kept me turning pages to see what would happen next (being a sci-fi kind of guy, I loved the bending of space-time element). But beneath the fast-paced action/adventure was the psychological struggle of worldviews in conflict. A young Jewish man encounters Yeshua, but struggles to believe, particularly in light of the holocaust. It’s as if Yeshua was in some sense a precursor, or an earlier form of an individual holocaust.But whatever readers take away, I think they’ll remember it for more than just an action/adventure with likable characters. Somehow it affected me more deeply. Perhaps it will touch your heart as well. 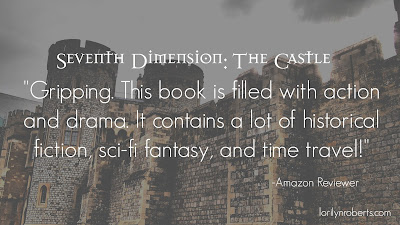 To Order from Amazon, Barnes & Noble, and other websites, click here

Posted by Lorilyn Roberts at 9:19 PM