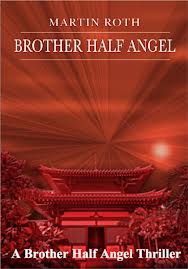 
What does a writer do when current events overtake the novel he is writing? In my case I just kept on writing, guessing (correctly) that eventually the status quo would be restored.


It happened a couple of years ago, while I was writing “Festival in the Desert,” the fourth in my "Brother Half Angel" series of international thrillers.


"Brother Half Angel" is a rough-diamond military commando who was once a leader of the Korean equivalent of the SEALS, but was forced to quit after an operation went tragically wrong, cutting off his forearm (and slicing in half his angel tattoo).


He is also a Christian with a passion for justice, and is now the leader of a clandestine group dedicated to helping the persecuted church.


I personally believe that the growing levels of persecution of Christians in the world today – particularly in Muslim countries – is one of the big issues facing the church today. I am continually shocked and disturbed that so few Christians really seem to know much about the continuing – and intensifying – threats against our brothers and sisters in so many parts of the world. I write my novels at least in part to educate my fellow Christians about these matters.


“Festival in the Desert” is set at a fictional mission hospital on the edge of the Sahara Desert in Mali, West Africa. It is under attack from Islamist extremists.


How many Christians know that Mali and surrounding countries constitute one of the key battlegrounds for Al Qaeda and related Islamist groups? Boko Haram, responsible for killing thousands in Nigeria, is just one of those groups.


This is why, according to a recent report in the Baptist Press, fully 70 per cent of the Christians killed worldwide in 2012 were Nigerians, making that country the most lethal place for Christians by a huge margin.


Here is an excerpt from “Festival in the Desert” –


“Drugs is just one of the problems,” said Dr Becker. “And it is getting worse, according to the embassy briefing I’ve received. We all know that the Sahara has become the transit point for shipments from South America, heading for Europe. That’s not new. But the big problem, the main problem now, is Al Qaeda. They are increasingly active. They are targeting this whole region. The whole of West Africa. All these traditionally moderate Muslim countries. They view them as a place for expansion. They are trying to radicalize the people. That’s why we see them in the markets more and more. Talking to local people.”


“It’s also all these new Saudi-sponsored mosques in town,” said Dr Steyn. “There’s more than a dozen of them. All recent. They send their imams from Saudi Arabia. Telling the women they have to wear veils and the men that they have to stop drinking alcohol and stop talking to people of other religions.”


“Yes, that’s exactly right. And according to the briefing I received, both Al Qaeda and the new mosques are recruiting young men, sending them off for training at madrassas in Saudi Arabia and Pakistan. These men come back home with radically new beliefs. They’re not tolerant any more. They hate the West, hate America, hate Christians.”


Dr Becker paused and glanced around. He looked a forlorn figure, with his white hair and lined face and wire-rimmed spectacles that sat at the end of his nose. “And then there are the Tuaregs. Thousands of them were forced to escape from Libya after the fall of Gaddafi, and now they’re back home, heavily armed and stirring up trouble. They’ve renewed their war of liberation against the government.”


“They’re a threat to everyone. They say they want self-rule. But a lot of criminal elements are involved as well. They’re involved in kidnap. Extortion. Whatever. Westerners will always be a target. And they are all mixed up together.”


“So what does all this mean?” asked Dr Ryu.


It was as I was completing the book that news came through that Tuaregs – the traditional desert nomads of the Sahara – had rebelled against the Malian government and captured about half the country, including the region where my fictional mission hospital was located. They were supported by elements of Al Qaeda, who quickly moved against all churches and Christians in the region. They certainly would have closed down my hospital.


My book was nearly done. I decided not to try to accommodate the new realities. I could not believe that Western powers would allow Al Qaeda to take over half a country. I was right. Eventually the French government sent in soldiers, who appear to have recaptured most of the region.


But the persecution of Christians continues. Just this month Islamists massacred several dozen teachers and students at a school in northern Nigeria. Sadly, Brother Half Angel is not ready to retire.

Martin Roth is a veteran journalist and foreign correspondent whose reports from Asia have appeared in leading publications around the world, including the Wall Street Journal, Los Angeles Times, Chicago Tribune, Baltimore Sun and The Guardian. He is the author of many books.

His "Brother Half Angel" international thrillers focus on the persecuted church. They feature Brother Half Angel, an abrasive former military man who heads a clandestine new military order that is dedicated to fighting for the rights of persecuted Christians around the world.

The five books in the series are "The Coptic Martyr of Cairo," "Brother Half Angel," "The Maria Kannon," "Military Orders" and "Festival in the Desert."

He is also the author of the Johnny Ravine private eye series, with "Prophets and Loss," "Hot Rock Dreaming" (Australian Christian Book of the Year finalist) and "Burning at the Boss," and the Feisty Ferreira series of financial thrillers - "Tokyo Bossa Nova" and "The Kalgoorlie Skimpy."

He lives in Australia with his Korean wife and three sons.

You can find out more about Martin at www.authormartinroth.com.


***
As part of the John 3:16 Marketing Network August Book Launch Event, be sure to visit http://bit.ly/Christian_Books for a chance to win a Kindle, a $25 gift card and a $10 Starbucks card. Learn more about our featured books also and free books offered from time to time.
﻿


Posted by Lorilyn Roberts at 3:43 PM