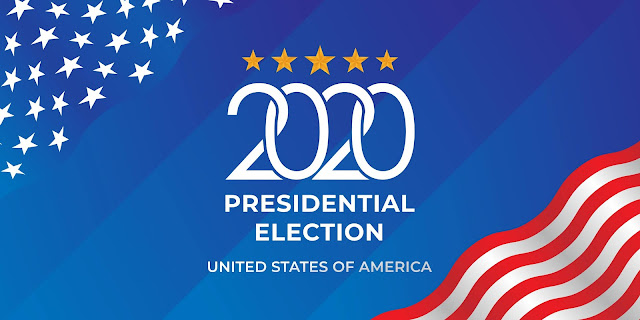 There is no doubt in my mind that Trump won the 2020 election on November 3 with millions of votes over Biden. I saw sufficient evidence of documented cases of voter fraud from multiple unbiased sources. I saw videos by experts who demonstrated how the votes were flipped on the Dominion voting machines from Trump to Biden. And you know what? If I hadn’t downloaded those videos off YouTube, I wouldn’t have access to those videos now because most of them were deleted by Youtube for “violating YouTube guidelines.”

Seriously, I’m not stupid, and if you put on your thinking cap, you aren’t either. Why would YouTube remove all those videos?

I’ve made a point of repeating the phrase here several times to point out that it’s a well-known fact that people tend to believe it if you repeat something enough times. Unfortunately, those who don’t think critically or biased individuals, when they can no longer discern the truth, become like sheeple.

Why would those who supported Biden and the media not listen to experts who have the evidence that votes were flipped—despite the fact it was illegal to connect the machines to the Internet? Evidence has revealed the vote flipping that occurred was a result of foreign interference.

Why would the Supreme Court refuse to take the cases presented by Texas, Sidney Powell, and others, and instead dismissed the cases based on standing, which is simply a procedural way to avoid looking at the incriminating evidence? Why would Facebook, Twitter, Instagram, and other social media websites de-platform Trump? Why would they remove thousands of Twitter followers from my account and the accounts of many patriots?

The most important question is, what are Biden supporters afraid of? If Biden won, wouldn’t they want transparency? Wouldn’t they want proof so the “fallacious” claims of “Trump patriots” could be debunked?

Pundits claimed dozens of courts had the evidence and that there was no election fraud. The courts did indeed have the evidence, but they never looked at what was submitted. Is that justice? Is that righteousness?

The Court of Heaven knows the truth, and that’s where I struggle. Why would God allow a usurper to take control of this country after so many people have prayed? Why has God chosen not to reveal the truth? 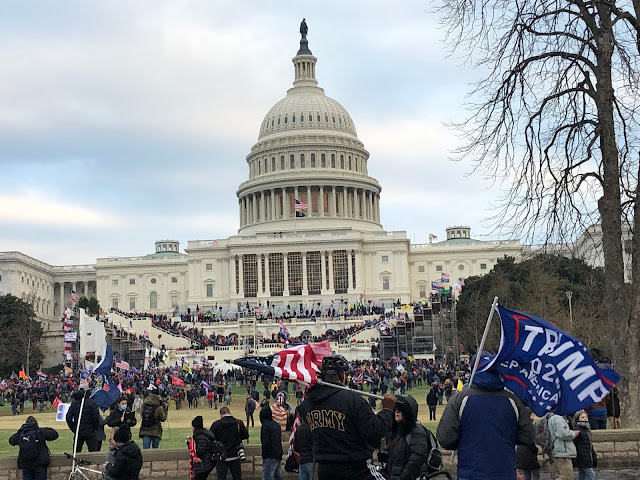 I went to Washington on January 6, 2020. I heard all the speeches before I walked over to the Capitol Building. I have been maligned mercilessly for it, that I participated in the Capitol storming and committed harmful, malicious acts—even by friends.

I prayed before I went. God told me I needed to go because I needed to be an eyewitness. I needed to stand in the gap for those who couldn’t go. What the media says happened—blaming Trump supporters for storming the Capitol and causing all the damage—is a big fat lie.

As a broadcast-captioner of local, national, and international news for the last twenty years, I’ll never trust the media again. I hate knowing that much of what I’m writing for the deaf or hard of hearing in the political arena is untrue. Perhaps those anchors and reporters I caption are in the same boat as me: Being forced to go with the narrative handed down by a few companies that control 90 percent of the news in this country. Something is disconcerting about that, but it’s another thing that people don’t want to talk about. Well, guess what? I’m talking about it, and I’m going to make some folks angry.

But for reasons I don’t understand, God is not revealing the truth. If He was going to, wouldn’t He have already done so? I have to wonder, is God going to allow the Marxist Democrats to take down this country as a judgment on our nation? We know the United States must diminish as a world power. This great nation of the last two hundred years is not mentioned anywhere in the Bible in the final days before the Lord’s return. To put it plainly, we are absent from the scene of world events, as if we never existed.

This saddens me because I love my country. I am a Daughter of the American Revolution. My ancestors came over on one of the two ships with the Mayflower. However, my love for God is greater than my love for this world. I will not back down from the truth that I’ve witnessed or the truth that God has revealed to me no matter who maligns me.

I wonder if some of the people who have attacked me are demonically possessed. Their words are that horrid. Has their hatred for Trump overtaken them to where they aren’t even able to repent? People can reach a point of wickedness when they are beyond the reach of God.

Examples like Potiphar from the time of Moses and Saul from the time of David is enough to put the fear of God in me. Jesus said in Matthew 24:37:  “When the Son of Man appears, things will be just as they were when Noah lived” (Contemporary English Version).

I have seen more hardness of heart in the last year than I’ve seen in my entire life.

Here’s just one example. A woman who used a wheelchair was in the jacuzzi at the gym. I had helped the older woman the previous week to get out of the jacuzzi and into her wheelchair. The aide with her couldn’t do it alone. I was doing laps in the pool when I noticed the woman was trying to exit the jacuzzi.

I stopped my laps and shouted above the noise, “Do you need help?”

The woman said, “Yes, could you please.”

I climbed out of the pool and went over to lend a hand. Just a couple of feet away in the same jacuzzi were two young men. They turned their backs, pretending not to notice that this large, disabled woman needed help getting back into her wheelchair.

Moments like that make me realize the depravity of human beings. I had the same feeling when I was at the Capitol, and men dressed in black holding long rods were attempting to destroy the Capitol windows. Not just one man but many. I yelled, “No,” and others shouted “Antifa.”

Why would anyone want to damage the Capitol of the greatest country in the world? Jesus said in Matthew 24:12: “Such will be the spread of evil that many people’s love will grow cold…”(Good News Translation), referring to the last days.

When it comes to nations, perhaps the vilest form of government is communism. One only needs to objectively examine the Democratic Party to see its slow decay from American liberalism a few years ago to the depravity that cares nothing for the unborn child. My heart cries out, “What’s wrong with these people?” 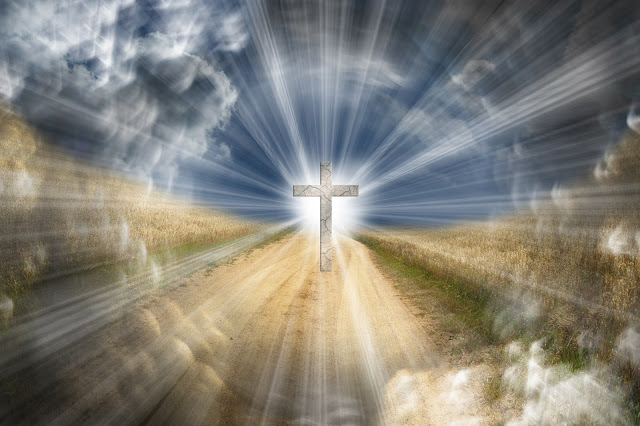 God chose not to intervene in this election (as of this writing), and we have a usurper sitting in the Whitehouse. I pray that those who cheated and flipped those votes (and they know who they are) will be miserable in their sin, and everything they do will fail. There is nothing worse than a guilty conscience. Power is fleeting, and evil always comes back to bite. I find it hard to believe that there could be anything in those depraved hearts that’s even redeemable. As individuals and corporately, we need to recognize what’s happening. America, wake up.

Unfortunately, those who perpetrated this evil against the American people and stole this election will end up taking down the United States. People in key positions who could have stopped this insanity and didn’t—Pence, the Republican leadership, the states that violated their own election laws and Constitution (Pennsylvania and Arizona for sure), and the U.S. Supreme Court. Not a single Democrat was willing to even look at the evidence of voting irregularities. They said, “Nothing here, move on.”

Many Republicans have insinuated by not speaking out against the blatant lies that there was no election fraud. The truth will come out eventually—when the Biden administration’s policies wreak havoc, screw the American people, destroy the economy, make people desperate—and at some point, those who are courageous will insist that the election data be scrutinized and assessed.

The media is as guilty as those in power. Complicit reporters are part of the beast system that is already in the world. That beast system will soon be led by a world leader known as the anti-Christ. Over the next couple of years, I anticipate the persecution of Christians and Jews and a slow progression toward communism (unless the Lord intervenes). The illegal power-grabbing Democratic leaders will tax us to death and confiscate our property.

Do I expect the results of the 2020 election to be overturned? No. Do I wish so? Yes. But to put my hope in people who are saying it could happen is a pipe dream. I’ve seen nothing to give me hope that even one individual might be willing to look at the evidence. But I do have hope in my Lord and Savior that justice will be served before the complete demise of this great nation. I want my country to be deemed worthy of Jesus’s one-thousand-year Millennial reign from Jerusalem.

It’s too bad for those folks who could have done the right thing and didn’t. Because God has allowed them to carry out their wicked schemes, they have no inclination to repent. Chances are they will burn in hell as they have gotten away with great sin not only against themselves but against millions of Americans. It will be worse for them on judgment day than if they had repented. Better to die for treason now than to spend eternity in hell.

In the meantime, I’m looking up, praying hard, and hoping that God will bring as many people into the His kingdom as possible during the Third Great Awakening coming soon. The church flourishes during persecution, and that’s what’s important now.

Nothing remains hidden. Truth always surfaces. Could a Civil War erupt when people realize they have been duped? I don’t know how far the U.S. will fall, but it’s nonexistent in the Book of Revelation. Maybe the rapture takes out half the population. I hope so. I hate for anyone to perish, but half is probably wishful thinking.

Keep looking up and keep praying for God (through His true church) to reach as many people as possible. Each day that passes is one day closer to the Lord’s return. The end of all things, as the Bible says, is near (I Peter 4:7). And that ending will be glorious for those who are on God’s side. 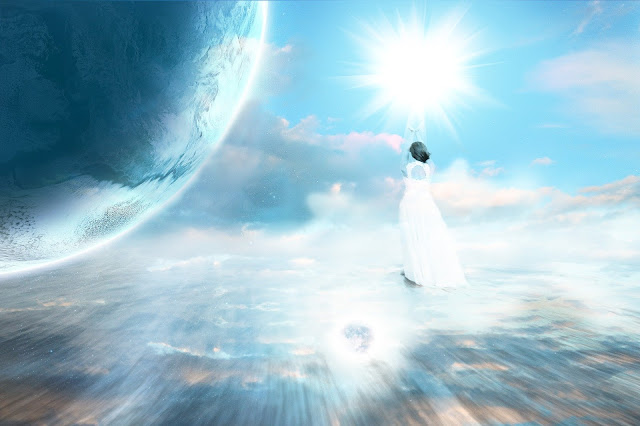 Posted by Lorilyn Roberts at 5:04 AM